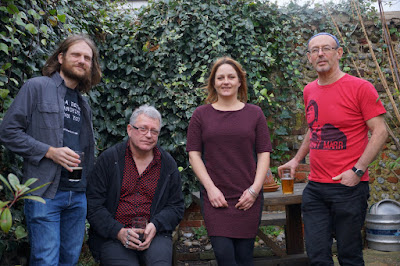 The Bandana collective came together somewhat by accident in the summer of 2010, when a scratch band was put together for a barbecue thrown by Pog. Combining “The Bandana Brothers” (cheeky fans/"performance art" combo who had invaded the sets of Pog, Wob, ASBO Derek, Tracy Curtis and many others) with contacts from the Hove Folk Club (now Railway Roots), we had a great time and realised a cracking band had been born.

We grew very quickly and began playing at pubs, festivals and benefits across the country (including the Tolpuddle Martyrs Festival in 2013). Our first album was released in 2012 - Viva Bandana, a mix of high-energy rockers, haunting melodies, wry glances at "Folk Music"(TM) and political passion. It even got us a 3/5 review in R2.

A slight hiatus (due to living life and other commitments) was ended in 2015 when we settled into a slightly newer lineup and began work on our second album. Defending is out now - and we think it is a fantastic collection of even more confident, strong songs: hear some on our Music page or on Soundcloud.